The overriding memory of early childhood in Dunbar in the early 1960s is of long hot summers. Happy days were spent on the East Beach with bucket and spade while my grandparents sunned themselves in the deckchairs from the hut by Johnny’s Amusements. We would then go along to the paddling pool and, if my twin sister and myself were lucky, have a shot on the paddleboats. A highlight was the shows, which still come to the Bleachingfield, but which were at that time held in the Barracks Square or Winterfield Park. Swing boats were a favourite, but gave way to dodgems and the waltzer in teenage years! 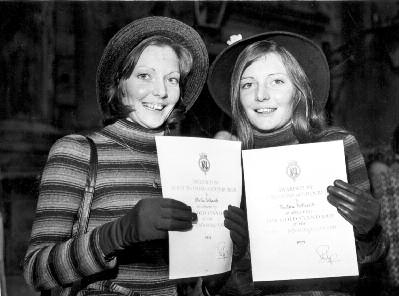 One of our favourite playgrounds from that time is fast disappearing, now the site of new housing development. Although just around the corner, Lochend Woods was a favourite picnic spot, with juice and sandwiches in amongst the bluebells and snowdrops, watching out for the gamekeeper. As a treat, we would buy strawberries from Mr Mackenzie’s market garden on the way home. Later on it was a favourite spot for building dens, climbing trees and tree swings.

When we were old enough to go out on our own, our playgrounds were still all around. On more adventurous days we would climb the rocks around the harbour and castle, each time daring to venture a bit further. There were long cycle runs up to Ossie Dean, Spott, and hikes to Aikengall, where we would roll our Easter eggs.

Of course there was the pool. Once we were old enough to go on our own, the highlight of the summer was the first day. Here we queued up at the ticket office for our season tickets. Each day we would run, often barefoot, down to the pool for a morning swim, either down the High Street past the gift shops and newsagents, with their rubber rings and buckets and spades, or down to the East Beach and along the ‘bottom way’ via Lamer Street. We then came home for lunch, a dry costume and back to the pool for the afternoon. Sometimes it was back again after tea, for the swimming club and, later on, a late swim, concert, or disco in the ballroom.

In the winter, there was still plenty to keep us busy; brownies turned into guides and later, ranger guides. A highlight in 1972 was our own ‘Gang Show’ when we visited local hospitals and halls.

Every Sunday there was Sunday school to go to, then bible class. Sunday school picnics in the 1960s took us to Gifford, the buses full of children, meat paste sandwiches, and bottles of Aitken’s Hubbly Bubbly, with streamers flying out the window. Christmas was a magical time. There was always a beautiful big Christmas tree in the church where we left a toy or gift at the Gift Service, and one in the hall for the Christmas parties, where Santa would always bring exciting presents!

As older teenagers Sunday evenings were spent again in the church hall at youth fellowship, where we made lifelong friends and met other church youth groups.

Saturday mornings were often spent at the Playhouse cinema watching cartoons and children’s movies. Later, it was the place to meet friends, and boyfriends, on a Saturday or a Sunday night.

As teenagers we also made friends from other countries, particularly France. Organised parties of teenagers came to stay in Dunbar with host families, long before the days of ‘twinning.’ We were hosts to three girls in the early 1970s and still keep in touch with one French girl and her family today.

Before we were old enough to go to Edinburgh ourselves, we were content with the local shops. Dolls, prams and toys could be found in the Gift Shop and Erinalls. Books, comics, annuals, ‘Sindy’ clothes and even records were bought from the newsagents. Sweeties were chosen from the many jars on the shelves in ‘Laura’s’ in the West Port or from ‘Annie’s’ on the way to school. Our school clothes came from the Kilt Shop (now the Ocean Chip Shop) while summer clothes were found in Miss Darlings’, Mrs. Taylor’s or Sinclair’s the drapers. Later, our first ‘maxi’ dresses for the school dance came from Daniel Smith’s.

Schooldays are a whole subject in themselves! However two school trips, one from the primary years and one from the grammar are worth a mention. A highlight in Primary 7 was a trip to Glasgow, by bus and via Roslyn Chapel and Linlithgow Palace. The treat was the return journey when we flew back from Glasgow airport to Edinburgh’s Heathrow! Later, in 1973, we joined the first Common Market school cruise on the SS Uganda and despite being caught in a force 9 gale, had a great time visiting France, Belgium, Holland and Germany.

Other memories of school (aside from work!) would have to include the many activities carried out for the Duke of Edinburgh Award, musical concerts, plays and school dances.

The above are only a sample of the many happy pictures that come to mind when thinking of childhood and growing up in Dunbar. The list goes on and on …

Pauline graduated in 1978 from Edinburgh University. She has worked for East Lothian Council Museum’s Service for ten years, both as a museum assistant and a researcher.