There is an early mention of the coastguard in the statistical account of 1840. A boat was stationed at North Berwick to combat smuggling. Eight men and their families lived in the town. There is no record of how successful they were.

The earliest coastguard ‘station’ was the small cottage-type building on the Anchor Green (now used by a roofing contractor). Coastguards were either serving navy men or reservists. The service was administered by the Admiralty and coastguards wore naval uniform and were subject to naval discipline.

In addition to the ‘regular’ coastguards were the coast life-saving companies who were volunteers. They were equipped with a purpose-built cart or wagon, which carried rockets, rocket-lines and breeches-buoy equipment. They could commandeer local tradesmen’s horses to get them to the scene of a wreck. Wrecks were commonplace since vessels were at the mercy of wind and tide. North Berwick Company was awarded the Board of Trade shield for an outstanding wreck service in 1927.

About the same time the coastguard ‘look-out’ was built on Platcock Rocks and the previous year saw the lifeboat-station closed. With the advance of steam and oil-fired engines the number of wrecks declined. On the Anchor Green was a tall flagstaff with a cross-yard and it was part of the coastguard duties to hoist black cones and balls to advise passing ships of gale warnings. Cone hoisted with apex uppermost signified a northerly gale, apex down for a southerly gale, adding a black ball allowed for an easterly or westerly gale. This was still done into the 1930s.

The long history of the coastguard service in North Berwick continued through the war years when coastguard duties multiplied during wartime and included coast patrols, reporting of mines and explosive objects, possible landings of German agents etc.

In 1952 it was considered unnecessary to maintain a station and the station was closed. The station living quarters were a row of stone-built, coastguard houses between School Road and Balfour Street. Here, too, was the stone-built ‘rocket house’ where the cart and breeches-buoy equipment was kept.

North Berwick remained without a coastguard station until 1969 when it re-opened as an ‘auxiliary’ station only. Some of its early members had served in the ‘rocket’ crew.

From fairly primitive beginnings (telephone, binoculars and little else) the station has progressively been upgraded. A succession of vehicles from Hillman Imps to Landrovers has extended the station coverage eastwards as far as the river Tyne, and west to Port Seton. Vehicles are fully equipped with VHF radio, search equipment, mobile searchlights, cliff rescue gear, etc.

It was fitting that, when vehicles arrived, the station moved away from the look-out back to the old ‘rocket brigade’ house. The look-out is now used by East Lothian Yacht Club for racing control. It is also very fitting that frequently, when lifeboat crew retire from duty, they transfer over to coastguard, ensuring that their skills continue to be utilised.

HM Coastguard acts as search and rescue co-ordinators. Coastguard teams investigate 999 reports and report to Forth MRSC who decide the appropriate response, activate launches of boats, or search teams for shore work, and control the rescue procedures. Forth MRSC is manned 24 hours a day, and monitors VHF channels 16 and 67. 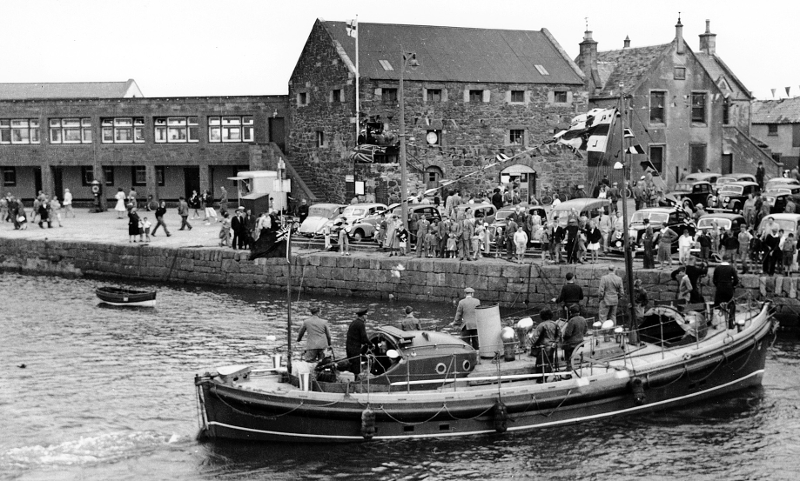 North Berwick harbour on Life Boat Day, 1950s. East Lothian Yacht Club is still based in the building in the middle of the picture but this has been refurbished, as have the other harbour buildings. The Seabird Centre offices and Education Centre are now housed in the building on the left. (A&J Gordon)

The first lifeboat station operated from 1860 until 1926 when it was closed. In 1967 it was necessary to re-open the station to deal with the growing number of incidents involving sailing dinghies, motor boats, air-beds etc. An inflatable inshore lifeboat was provided (one of four sponsored by the Blue Peter TV programme) and housed in the old granary until 1990. The RNLI then re-acquired the original boathouse (the Victoria Cafe) including additional land, which enabled a major upgrade to be undertaken in 1997 to house the lifeboat and provide a well equipped and modern station. The present lifeboat is the fourth generation and all have been paid for by Blue Peter. This is manned by a crew of three volunteers but at least 15 volunteers are required to ensure it can be called out whenever required. The average launch time is six minutes from the time the crew is alerted by ringing their electronic pagers.

Helicopters have increasingly taken over rescue work in recent years but they are not always available and at best it takes 40 minutes for a helicopter to reach the area from Northumberland. The inshore lifeboat can operate in poor visibility and go into shallow water areas more easily than a conventional lifeboat. Equipment carried includes a navigation system, night-vision scope and oxygen to give to divers if they have had problems with the ‘bends’. Since 1967 there have been 262 launches with 108 lives saved and many others given assistance.