The story of the Pond Hall has been addressed already (see Townscapes, Buildings & Landscapes of Distinction), but there is a further side to its role in the burgh. For years the Pond and the Pond Hall were the main facility and focus of leisure for residents and visitors alike (see also Economy – Tourism).

During the 1930s, the opening of the Pond was signalled each year with long queues of children and grown-ups from the local community and all over East Lothian. Its excellent facilities and reputation made the Pond a major training venue for clubs all over Scotland. The Portobello Scottish and British Water Polo Champions were frequent visitors. 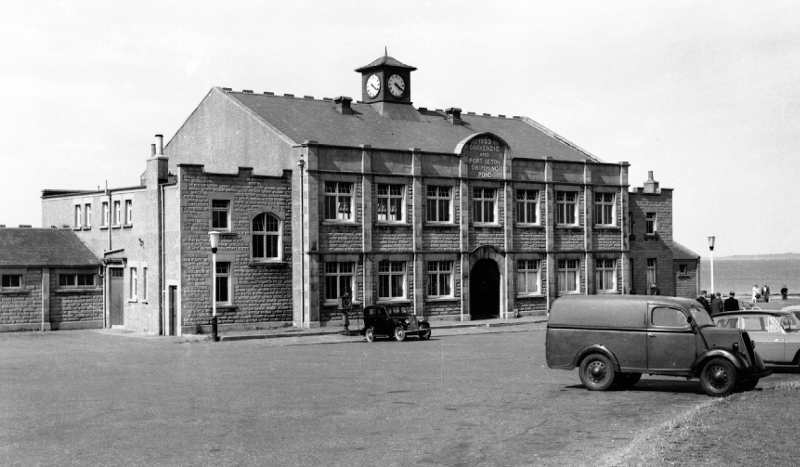 The Pond Hall, in addition to supporting the summer season, was the civic, social and recreational centre of the community. In addition to the library, the function hall was in continuous use holding weddings, dances, youth and church associated activities. The Burgh Council Community ‘Greetin’ Meetings became a special event in the calendar.

The post-war years saw the emergence of new community activities. In 1947, the Cockenzie Players staged their first production in the Pond Hall and continued until 1961. The Cockenzie & Port Seton Bowling Club and Gala fund raising dances were held there. The car park with the Pond Hall as the backdrop was the annual setting for the crowning of the gala queen, with the first being held in 1949; this event attracted huge crowds from all over East Lothian.

The swimming club reformed in 1949, and by 1955, had a membership of 400. Swimming galas resumed and during the 1940s and 1950s (as in the 1930s), more Scottish native and all comers’ records were established and another frequent visitor was Peter Heatley, the Commonwealth gold medallist diving champion along with local club diver, A. McNeil from Tranent.

In 1951 the paddling pool opened and in December 1953, the clock tower was unveiled on top of the Pond Hall. It was donated by public subscription in memory of Dr Black. The 1950s saw floodlit bathing introduced, with dancing every Saturday night in the Pond Hall. Over the coming years, a putting green and trampolines were added to the new numerous attractions in and around the Pond and Pond Hall.

The mid 1960s saw the start of a major decline in the swimming club (originally formed in 1928). By the 1980s the Pond was a shadow of its former glory; new indoor swimming and leisure centres were appearing and planned in Dunbar, North Berwick, Haddington and Musselburgh. With the opening of the Port Seton Leisure Centre in 1994, it became increasingly evident that the Pond and Pond Hall facilities were no longer as attractive as they had once been. Closure came in 1995.

The Cockenzie & Port Seton Local History Society was originally formed with the help of East Lothian District Council. In 1989/90 a small group was formed which met in the old public library in the Pond Hall, and was guided by Mrs Clare Johnston and Mrs Elizabeth Clark from East Lothian District Council Library Service. Mrs Elizabeth Taverner was the secretary and the first chairman, Barry Johnston.

As membership increased, the library became too small, so the Lesser Pond Hall was used, although occasionally it was necessary to meet in the Pond Hall itself. Following the building of a new Community Centre in the King George V Park in Port Seton, and with the Pond Hall being demolished, the meetings are now held in the Port Seton Community Centre. The society meets on the second Tuesday of every month, from October to April; the syllabus consists of a programme of speakers on a variety of interesting topics, with the aid of film and video presentations. One or two outings are arranged each year.

The society has enjoyed good attendance at all its meetings, and is always welcoming anyone new or interested in all things historical. There is a nucleus of about 20-30 members, with the monthly talks generally attracting an audience of 30-40. A few years ago, the society collected the taped recollections of a number of local worthies. The society supports and contributes to the Community Fortnight in May/June each year by either arranging an exhibition within the Community Centre or by a walking tour of the burgh, taking people to see the sights of historical interest and showing our rich heritage at first hand. As just one of several societies in the burgh, the Local History Society was involved in the re-enactment of the Box Meeting, held to celebrate the millennium on 15-16 September 2000.