In May 1953 the 1st Royal Scots were given a civic welcome to Haddington; they were present at the formal opening of Amisfield golf course and planted trees at Roodlands housing scheme. The 1st Battalion was mobilised for the Suez campaign in 1956. It included national service men who served with them for a year, partly in Egypt and partly in Cyprus. Some regular soldiers and national servicemen were from EastLothian.

In 1960, between 22nd May and 4th June, the 1st Battalion the Royal Scots marched through their regimental area, taking up residence in Castle Park barracks, Dunbar. They visited East Linton, North Berwick and Athelstaneford. Returning one evening to Haddington, they put on an impressive display – beating the retreat, marching past with colours and bayonets fixed, while provost Crow took the salute. This was followed by a game of football and a meal. The following day, the battalion went to Macmerry, Tranent, Prestonpans, and Musselburgh and Dalkeith. 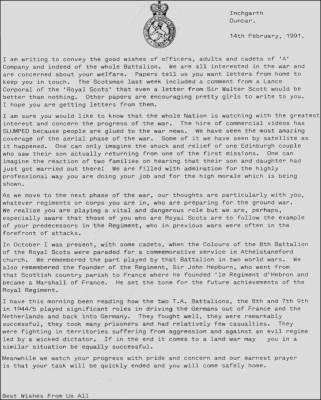 In September 1970 Capt AEF (Edward) Cowan, together with the Sealed Knot Society, organised the first and biggest re-enactment of the battle of Dunbar on Doonhill. There was widespread local involvement including groups from local schools, including a contingent from Dunbar grammar school in the Scots Army under David Leslie opposing Cromwell. It was seen as a KAPE (Keep the army in the public eye) or a recruiting exercise.

The 1st Battalion Royal Scots took part in the Gulf War in 1991 and several young soldiers from East Lothian took part, several of whom had been cadets only a short time before.

Prompted by a letter in The Scotsman from a young soldier asking for letters from home – he even said that a letter from Sir Walter Scott would be better than nothing – as company commander of East Lothian Company of the ACF, I wrote to about a dozen ex-cadets whom I could identify as serving in the war, though not all were in the Royal Scots.

On 3rd June 1997 ‘A’ Company of the 1st Royal Scots made a ‘freedom march’ with colours and fixed bayonets through Haddington, and on 4th June another through Musselburgh. They were received by East Lothian district council.