Health in the county

Good health throughout the ages has been identified as a precious asset. For most individuals it comprises a complex mix of longevity, emotional well-being, absence of pain, being valued by others and physical autonomy. The latter half of the twentieth century has seen a greater focus on this holistic concept of health following its definition in 1948 by the then newly established World Health Organisation (WHO) as

a state of complete physical, mental and social well-being and not merely the absence of disease.

Historians reviewing health in East Lothian during the second half of the twentieth century will note substantial changes in the way of life – with fewer men engaged in manual tasks, more women in paid employment outwith the home and a greatly increased proportion of the population travelling to Edinburgh and beyond for work. These, and other lifestyle changes shared with the rest of Scotland, have contributed to the following important changes to the health of people in East Lothian.

A change in fertility patterns resulting in smaller families; fewer births to women over 40 years; more births to women aged less than 20 years; and a massive increase in the proportion of births to single mothers from 9.1% in 1945 to 36.8% in 2000, with the lowest rate of 2.3% in 1960. 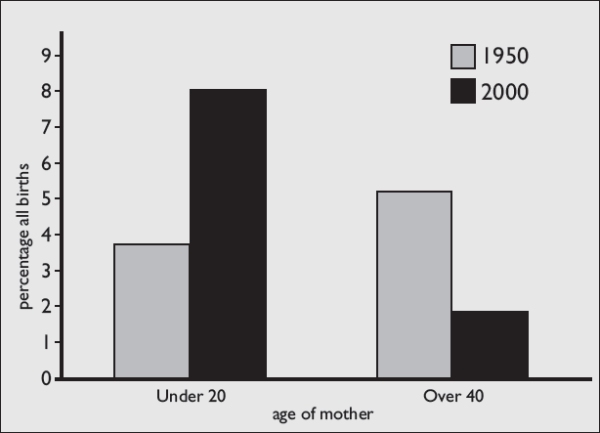 Improvements in living conditions, the successful introduction of effective immunisation programmes and the introduction of antibiotics in the late 1940s and 1950s all contributed to the reduction in deaths from infectious diseases. 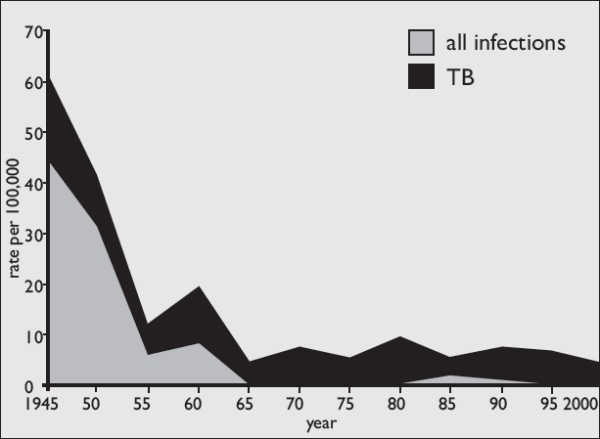 Virtual elimination of the traditional epidemic diseases of childhood was achieved during this period through the successful introduction of effective immunisation programmes – diphtheria (1941), whooping cough (1951 as a stand alone vaccine followed in the late 1950s by a version combined with diphtheria and tetanus toxoids), polio (initially 1956 as a ‘killed’ vaccine followed in 1962 by a ‘live’ vaccine), measles (initially 1968 as a single vaccine), german measles (rubella) (initially 1970 as a single vaccine targeted at teenage girls and potential mothers) and mumps (1988 within the combined MMR – measles/mumps/rubella vaccine targeted at infants and pre-school children). By 2000, chicken pox still occurred in epidemic form and less common infections, such as meningitis, continued to cause serious illness and anxiety. The last case of smallpox in East Lothian occurred in 1942 in a miner who caught the infection from an overseas patient in an Edinburgh hospital. An emergency campaign, involving the vaccination of 3000 people in the relevant community and closure of all schools, prevented any further spread. By the early 1970s complete worldwide eradication of smallpox had made compulsory vaccination of infants no longer necessary.

However, a cluster of serious ‘new’ infectious diseases emerged in the 1980s and 1990s – HIV/AIDS; E.coli 0157 (a bowel infection transmitted from infected cattle, causing permanent kidney damage in some patients); a form of spongiform encephalopathy caused by prion particles initially affecting cattle (BSE) and subsequently believed to have been transmitted to humans in the form of vCJD. At the same time TB re-emerged in a multi-resistant format and an antibiotic-resistant strain of a common organism (MRSA) started to appear amongst hospital patients. Although numbers of these emerging infections were very small in East Lothian, they served as a reminder that infectious agents can evolve and create new challenges for health. 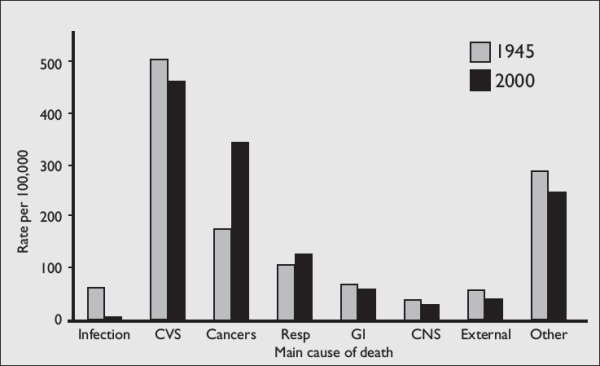 Concern has developed for the growing inequalities in health between rich and poor communities, illustrated by significantly different premature (before age 65 years) death rates. Table 4 shows a premature death rate for those living in the deprived communities of Lothian more than twice that of those living in the more affluent areas. In 1996, an additional 593 premature deaths occurred in Lothian because the death rate experienced in affluent communities was not shared by those in average and deprived areas. (The DepCat (Carstairs & Morris, 1991) classification is used to differentiate the communities. It is based on 1991 census data for male unemployment, social class, car ownership and overcrowding.) Similar marked differences occur between communities in relation to illness and quality of life. 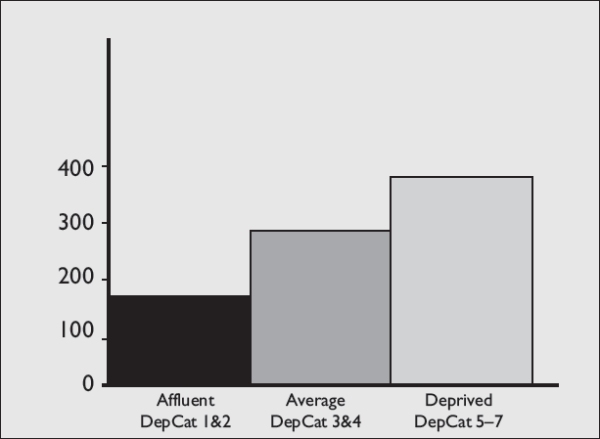 A greater recognition emerged that individual lifestyle behaviours contributed both positively and negatively to health; and growing awareness that social contact and wider environmental factors such as housing and income influenced health both directly, and indirectly by their influence on personal behaviour.

It was increasingly recognised that ‘modern’ life in the developed world at the end of the twentieth century was contributing to major international health problems in the future as a result of climate change due to the emission of polluting ‘greenhouse gases’ (see also Fred Last, this volume).

The introduction, in 1948, of a national health service (NHS) funded primarily from general taxation and free at the point of delivery, made health care accessible to all. By 2000, many changes had occurred within the NHS and patients were increasingly contributing in terms of the planning and evaluation of services

Recognition that health is more than the absence of disease stimulated a wide range of research to determine the key factors that influenced health – both positively and negatively. Although there is a degree of interaction between them, these factors broadly divide into five categories:

a) ‘Who we are’ – biological factors: genetic make up; gender; and age

The most significant biological change affecting health in East Lothian between the 1951 and 1991 censuses has been a change in the overall age structure of the population from 25.54% to 18.13% of the population being less than 15 years old and from 1.19 to 3.94% being aged 85 years and over, with a further projected increase in the latter to 4.5% by 2004.

For the future, genetic biological changes may become possible using technologies that emerged in the latter part of the twentieth century: in-vitro fertilisation, cloning, transplantation and mapping of the human genome. These will require democratic debate if the full moral and ethical implications are to be considered. Imagine, for instance, the potential impact on the population structure if the genes predisposing some people to cancer and those controlling the ageing process could all be neutralised.

b) ‘Where we live’ – environmental factors: economic; social; cultural; and physical, including infections and a wide range of potential hazards

The most profound environmental changes affecting life and health in East Lothian were the loss of the mining industry in the west; the mechanisation of farming and loss of farm labourers; changes in the means of food production and distribution; the growth of a ‘consumer oriented’ society; the massive growth in car ownership; and the steady increase in commuting to Edinburgh and beyond for work.

Cold weather continued to cause an excess of deaths in winter months. Poor housing and homelessness contributed to this effect, as well as causing illnesses relating to dampness and depression. Homelessness increased in East Lothian as a result of the sale of council houses in the 1980s and the loss of ‘tied’ cottages for farm labourers.

The uncontrolled growth in the number of cars contributed to death and disability in road crashes, although better design and improved traffic management schemes have prevented a parallel increases in deaths. Growth in the use of cars contributed significantly more to ill health by reducing physical activity levels both for the car users and those who fear walking or cycling in busy traffic.

Pollution in the mid twentieth century was mainly visible particulate smoke from coal-fired power stations, factories and home fires. By the end of the century, clean air legislation had reduced such pollution to a minimum but new, less visible, pollution hazards had taken their place – such as toxic waste discharged into rivers, excess fertiliser run-off into fields and rivers and small airborne particles from diesel fumes. Although no dramatic effects were evident in East Lothian, possibly the most important environmental influence on health in future centuries will be the climate change effects resulting from the excess production, particularly in the ‘developed world’, of ‘greenhouse gases’ – the main contributors being power stations (of which East Lothian has two), aeroplanes and cars. A windier, wetter and warmer Scotland is projected.

The potential health impact of open cast mining was a particular cause of concern in parts of East Lothian, as was the potential impact of the major landfill site at Oxwellmains, Dunbar.

Similarly, understandable concern accompanied the building of the nuclear power station at Torness, near Dunbar. While no measurable adverse health effects were identified for East Lothian residents from Torness, the main health concerns relating to nuclear power remain the inherent danger of an hazardous product for which there is, as yet, no long-term storage or decontamination technology.

At an individual level, the social and economic environment contributed importantly to health and well being. Poverty, particularly the relative poverty of those on income support within an affluent society, and the aggression of others contributed to chronic emotional stress which is associated with an increase in heart disease, cancer and mental health problems. The biochemical and physiological mechanisms contributing to these links are complex and research is continuing to identify the relevant neuro-transmitter and immune mechanisms involved. 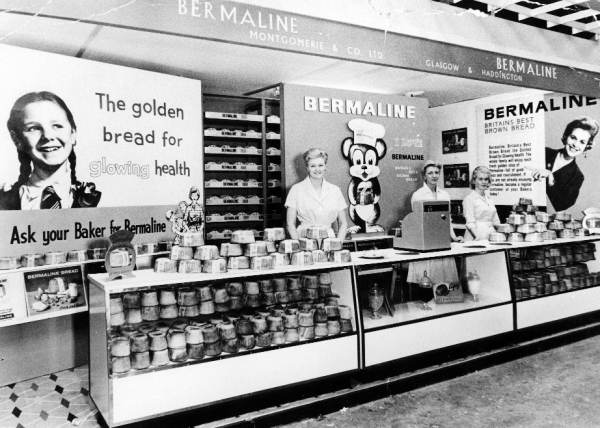 In reviewing the impact of lifestyles and behaviour on the population of East Lothian it must be remembered that, for many individuals, the social and economic culture within which they lived had a powerful influence on the way they behaved. This was confirmed in a study (Currie CE et al 1991, pp 443-453) in 1987 of over 2000 East Lothian residents who reported that their efforts to develop a healthy lifestyle were helped if their family, friends and workplacewere supportive; if appropriate facilities were available; if they enjoyed the result of the change; or if they were saving money. Conversely their efforts were set back if their family, friend or workplace were unsupportive; if facilities were unavailable; or if they had a craving for their old, unhealthy habits.

Action to promote healthier lifestyles needed therefore to extend beyond mere entreaties to individuals to change their behaviour. Importantly, advocates for improved health had to persuade businesses and the media to make ‘healthy choices’ the easier choices and, in certain circumstances, legislation was promoted to support this – such as the seat belt legislation.

Lifestyles and behaviour that impacted particularly on health included: 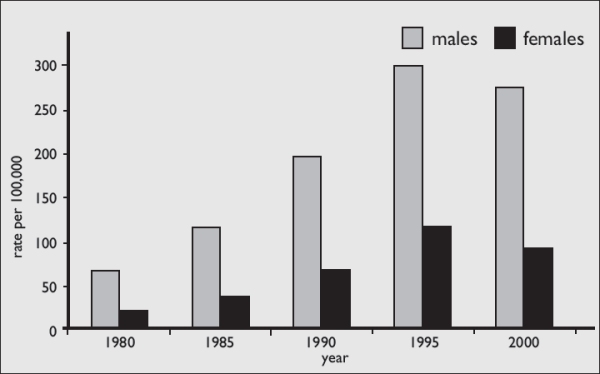 d) ‘How we interact’ – connectedness: particularly with family, friends, neighbours and in the workplace.

Increasingly it was, and remains, recognised that the health of individuals is significantly influenced by the extent to which they interact with others. The family provides the most important framework within which children grow to develop a sense of self-esteem and confidence in their own ability to cope with the wider world. Ideally they learn the importance of trust and the many different ways in which they can contribute to the happiness and wellbeing of others. A strong, socially cohesive and healthy community is one in which neighbours know and support each other, social organisations flourish, and crime rates are low, and overall levels of health and well-being are high. Communities under threat, whether these be workplaces facing closure or villages facing the imposition of open cast coal mining, are places where vulnerable individuals are at greater risk of ill health.

Health Services, Social Work and Education in the county are addressed as separate essays. As the years progressed from 1945, not only health services, but the social work services too, expanded enormously. As efforts to improve access to the services on offer increased over time, it was hoped that people’s health and well being would improve to an equal degree. Unfortunately, even by the end of 2000, some individuals were still slipping through what was intended to be a foolproof system; benefits went unclaimed by some elderly people, which impacted on their ability to keep warm; cultural inhibitions still prevented some individuals from seeking medical help early enough; centralisation of services made access difficult for those in rural areas without transport; and alienation from the education system prevented many young people from maximising their potential.