My grandparents were ‘small holders’, a way of life that involved the whole family. Looking back, we children had a fantastic childhood full of laughter, sunshine and home-grown entertainment. My father grew-up on the holding and during the early years of his marriage worked the holding with his parents as well as working as an agricultural representative. 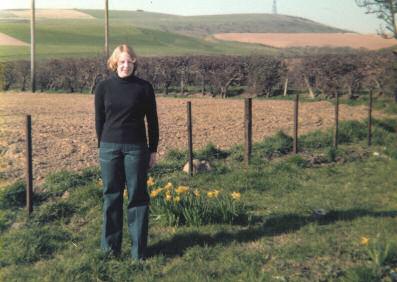 For us children, life was very routine but never boring and we spent all our spare time and school holidays helping. We all had our set chores, from collecting eggs and feeding animals before going to school, to finishing homework, having our tea and dying to get outside again to help at harvest, shawing turnips, back-breaking tatty lifting or in fact whatever we could do to help, rather than hinder.

Routine was the norm. Up at 6am, the fire was always ablaze and breakfast being prepared. Do our chores, come back for breakfast, and catch the school bus, which always seemed to take an age as it made its way surely but carefully around the country lanes. Dinner was always at 12 noon and consisted of a ‘healthy’ and substantial meat and two veg with a milk pudding to follow. Tea and biscuits at 3pm, tea at 5pm and supper at 8pm.

I always awoke to the wireless with my grandparents and parents listening to the farming programme. We did have a television, which was switched on for weather and news programmes, Saturday wrestling and football results, when my granddad patiently checked his coupon, and for a Saturday night ‘Bonanza’ treat. But to be honest, we spent most of our time outdoors.

A ‘whistle’ would call us for meal and bed times, or when we were needed, or even better when the mobile vans arrived with their produce. A number of vans called each week, the ‘Store’ butcher, the ‘Store’ grocery van, the local baker, Dixon’s Hardware, Willie Sanderson with his boots and shoes, the fish man and so on. We were very well served and travelled by post bus or the Saturday bus which did the country trip to Dunbar for other requirements.

Everyone worked equally as hard, my mum and nana worked tirelessly in the house as well as helping on the holding. My dad and granddad would help in the house and friends, relations and us children would all be roped in to help with whatever was needed.

Visiting was of great importance to this rural community and on a Friday night, relations and neighbours would arrive for a chat. This talk used to fascinate me as they would talk of local affairs, farming and days gone by. I learned so much of local folklore, historic tales and the rising cost of every day items.

The Jaffrays at Thornton Glen, 1960s

My father was rapidly promoted with his job and eventually we had to move away from East Lothian, but returned when possible, every weekend, and school holiday to help in what was a traditional and happy way of life. Even when we moved away, life on the holding still remained with us as weekly phone calls kept everybody in touch.

It is a way of life, which will never be forgotten. The hard work, the variants of the weather, the peace and quiet, the noise and confusion, the sadness and the joy and above all the love of a land and the respect for its people provided everybody with a close bond and a tremendous enjoyment of life.

My family and I are now based at Belhaven, where I run P.J. Advertising (established 1986), and my husband Dave Pate runs Belhaven Trout Company (established 1975).

After years of the Jaffrays being based in and around Innerwick, my father’s generation started to leave the area in search of pastures new; today, family members are scattered as far away as South Africa, New Zealand and Australia, with some based marginally closer in Essex and Dorset.